Lord Edward A. Gelson, the Viscount of Wesbury

Independently wealthy; Lord Wesbury could devote all of his time to his passionate hobby of raising racehorses. However, being a wise man, he has resisted Society’s false lure of entitled well being and sloth.

Outside of applying himself to organizing an animal Humane Society in London, he is a longtime supporter of the Royal Society for the Prevention of Cruelty to Animals, founded in 1824.

A founding member of the Elements Club, Lord Wesbury also enjoys sharply investing his wealth into emerging ventures that his beloved cat Sir Furry helps pick as winning investments. And how does Sir Furry assist? In Lord Wesbury’s mind, any man who is kind to an animal when nervously applying for funds is a man that has the patience to walk a venture through to completion.  The “fluff test,” so to speak.

Artistic, sensitive, and intuitive, there is nothing Lord Wesbury likes better than to brainstorm, but woe betide the conformist that lacks imagination! Lord Wesbury has zero tolerance for ambiguity.

Raised Anglican, Lord Wesbury leans toward Quakerism due to the sects embrace of females in ministry and the allowance of Spirit led inclinations.

Following the death of his wife, Ida, in childbirth in 1886, Lord Wesbury fell into a deep depression which led to an alcoholic addiction.  His father, the Earl of Kentfordly, is alive, along with his mother. Both are actively involved in charity work. Two married, younger sisters round out Lord Wesbury’s family connections.

In 1893, he met and married Master V, a stage singer, the relationship of which caused no end of gossip.

Hating routine, Lord Wesbury actively avoids boredom and is prone to thumb his nose at Society’s rules and regulations. Firing his blood only requires that an animal be hurt or wounded.

He enjoys being  is a step-father to V's adopted daughter, Victoria, and he is looking forward to the day he will hold a child of his own.

About the Actor: Matt Musgrove

Matt Musgrove grew up in Eugene, Oregon. A graduate of New York’s Ithaca College with a degree in Musical Theatre, he trained in acting at The Ithaca College London’s Center. In 2011,  he toured nationally in “We the People,” an Off-Broadway musical about the founding fathers. He was recently featured in the NY Times as part of the Family Opera Initiative’s original libretto, “CAT the Opera,” He also was a soloist in the original cast recording of Ian Strasfogel’s Opera, “Il Musico.” Outside of stage performances, he develops and produces independent short films. Musgrove resides in Los Angeles.

the second story in

It took only one look into her eyes, and Lord Edward Gelson, the Viscount of Wesbury (Matt Musgrove), knew his soul was instantly ensnared. But where to find this elusive, masked entertainer with the voice of a spiritual siren, the body of a goddess, and a psyche filled with transparent internal pain? Master V (Cassandra Nuss) has not let a wife-beating ex-husband, an obsessed fan, or a chauvinist racing owner get the best of her plans to emerge into Society. Determined to keep her heart in check, her goal of building her secret singing career while publicly racing her prize stallion are put to the test by the attentions of Lord Wesbury. 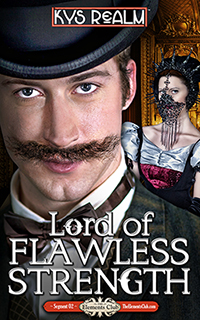